The weather was perfect so we set off to Ya Ha Tinda in the foothills of the rockies for a day in the sun. Stunning scenery. 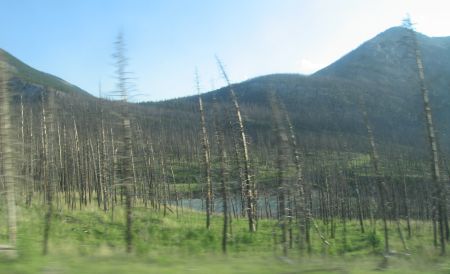 Fires in the last few years left swathes of dead and stunted pines. Apparently the timber that remains is excellent for building as it has been fire tempered – yet is virtually undamaged (although dead).

Completely surrounded by mountains we stopped in a recreation reserve where the ‘horsey people’ come to play in the weekends. The rockies proper in the distance.

Closeup of some cute pinecones. It’s is all a little stunted up here. Must be damn cold under a few feet of snow. This pinkie ring replaces one that unfortuantely yumped off my finger on one of the aeroplane legs coming to Canada. Hmm must have been time for a change.

Lovely little gorge with crystal clear, and damn cold water flowing through it.

– Grin From Below (Ya Ha Tinda, Alberta, Canada)

Was so good to be out in nature again. Canada really has some nice scenery. Loving it.

This is the waterfall we walked up to, flowing into the ravine visible in the previous photos. Beautiful.

The females of the family being admired, admiring the view.